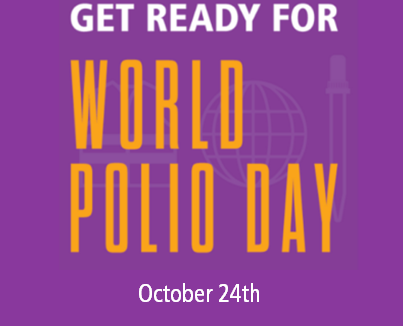 It is time to start thinking about World Polio Day and plan actions, activities and events that raise public awareness of the importance of ending this disease once and for all.   This year, despite all the challenges related to COVID-19, we had great news: on August 25, the African region was certified as polio-free! This is a monumental achievement, made possible by the dedication and tireless work of Rotarians, partners, donors and supporters of the cause.

However, polio remains endemic in Pakistan and Afghanistan.  Therefore, we must continue to mobilize and sensitize governments, corporations and individuals about the need to eliminate this dangerous virus.  World Polio Day , October 24, is the ideal time for that.

What can you do:

2020 Knock Down Polio Kick-off     Polio eradication is Rotary International’s top priority. Most recently on August 25, 2020, the World Health Organization (WHO) announced that the polio virus has officially been eradicated in all 47 countries in Africa. This is so encouraging! We are so close to making the goal of a polio free world, a reality. Let’s do our part to help!

The 2020 KNOCK DOWN POLIO fundraiser looks different this year due to COVID-19 and social distancing. Not to worry though! This time around – we will offer options for you to add some great Rotary apparel to your wardrobe and more importantly, to raise some much-needed funds for Rotary International’s – End Polio Now campaign!       Alas’ we are addressing the request that many of you have had in recent years. That is, to have our very own Detroit Rotary Club t-shirts and other Detroit Rotary gear to wear to club and district events, service projects, and frankly to just about anywhere. If we could get every member to at least buy one $20 t-shirt – What a great way to represent our club!
For your convenience, we have created a Pop-up Store which will showcase available merchandise for purchase. Please see below, the ‘Pop-up-Store’ link. Merely click on the link and shop to your heart’s desire! Place your orders soon because the store doors are open only for a few weeks. Proceeds from your purchase will be tracked with your name and forwarded to Rotary International for recognition. And just to sweeten things, the Bill & Melinda Gates Foundation will triple your donation!!!
Here is the link to the Knock Down Polio Store. Package pick-up instructions will be provided.
Finally, there is one more option. If shopping is just not your thing, we always welcome your check to The Rotary Foundation, which directly supports the End Polio Now Campaign. Checks should be made out to: Rotary International, C/O Russ Ives, Box 309, Troy, MI. 48099. Please write in the Memo: End Polio Now   We will continue to provide the store link and updates in the Rotoscope through October, with the store doors closing on October 24, Rotary International’s World Polio Day. Thanks for your support and happy shopping!!

There may be a coin shortage, but the Trenton Rotary club is asking for 100 pennies for polio this October, or a crisp dollar bill or online donation would also help eradicate Polio.  A simple dollar in October will hopefully raise at least a few more bucks and awareness toward the elimination of the disease.    Many Americans think polio is already a thing of the past. For the United States it may very well be, but there are still polio cases reported in other places around the world, so the battle for eradication continues

Many boomer-aged residents have experienced the pain of childhood polio and the ancient “iron lung.” Hopefully this country will never forget how severe polio was and how many lives it took or maimed during its domination in the U.S.     Brad Johnson, a Trenton resident, had experience with the iron lung they used for polio patients in 1968, when he was 16. Though he did not have polio, he was diagnosed with polymyositis, which has similar symptoms as polio. His experience with the iron lung helped him to breathe     “With my experience in the iron lung, like many polio victims, I could only talk. None of my muscles would work and for three weeks the machine did my breathing for me and I was completely immobile.” Johnson did respond to the treatment and within a month recovered completely from the episode.

From a 2017 Trenton Trib article we found that “In 1952, after playing outside with friends, William LeFevre, then 4 years old, came home and reported to his mother that his neck hurt. Within a short time he couldn’t move his neck at all, so his parents took him directly to Herman Kiefer Hospital in Detroit.     The doctors did not know what was causing this paralysis and felt that he needed to be quarantined until the solution was found. LeFevre’s parents told him years later that the physician team emptied an isolated glass display at the nurse’s station and there he remained for three weeks. The staff was so nervous about what he might have that if he dropped a toy outside the chamber, he was told it was immediately burned.    The doctors eventually diagnosed the problem as a type of polio. Because polio had almost ended its terror in the U.S., iron lungs were hard to obtain. But by the time the disease had run its course, LeFevre was breathing fine, though his neck was never the same. One leg grew longer than the other and he was told he should be fitted for braces.

When he returned home from the hospital, the neighborhood families had been told he had something contagious and he wasn’t able to hang around many kids any longer. So, he refused the braces as he did not want any other friends to see him with a disability. Later his family moved to another city and that helped his social life.     But the memories of that time remain vivid for the longtime Trenton resident, who is also the longest-serving current member of the community’s City Council.      “We really need to not forget what a devastating disease this was,” he said. “We need to make sure vaccinations continue worldwide so no other person has to suffer with the long-term effects.”        Through his research on the ailment over the years, LeFevre found out that iron lungs used to treat polio patients originally were made from spare vacuum cleaner parts, which may also be the reason he has embraced the vacuum cleaner business. That is probably is why he has also been so personally engaged as a member of the Trenton Rotary Club for many years, as one of the international organization’s main goals is to eradicate polio worldwide.”

Because of the efforts of Rotary and its partners, nearly 19 million people who would otherwise have been paralyzed are walking, and more than 1.5 million people are alive who would otherwise have died. The infrastructure we helped build to end polio is also being used to treat and prevent other diseases (including COVID-19) and create lasting impact in other areas of public health.     With polio nearly eradicated, Rotary and its partners must sustain this progress and continue to reach every child with the polio vaccine. Without full funding and political commitment, this paralyzing disease could return to polio-free countries, putting children everywhere at risk. Rotary has committed to raising US$50 million each year to support global polio eradication efforts. The Bill & Melinda Gates Foundation has pledged to match that 2-to-1, for a total yearly contribution of $150 million.      You can donate any tax-deductible amount for the 100 Pennies for Polio fundraiser at trentonrotary.net. World Polio Day is October 24.